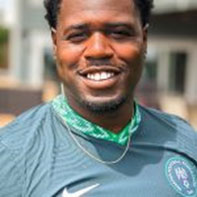 Dillin Randolph currently teaches English and AVID at Niles West High School in Skokie, Illinois, where he also serves as an assistant wrestling coach, a sponsor of the Black Student Union, and the district sponsor of African/Black/Caribbean Families Fostering Inspiring & Nurturing Independence for Today’s Youth (AFFINITY). Randolph is passionate about fostering a love of reading and writing for enjoyment in his students, as well as advocating for Black linguistic justice. Previously, he taught at Rolling Meadows High School, where he employed a hip-hop ed curriculum based on analyzing the poetic elements in rap music and comparing them to American literature texts. He also served as the head wrestling coach and was a strong advocate for girl’s wrestling to be sanctioned as an official IHSA sport. Randolph is also an alumnus of Teach Plus Illinois, where he worked with the DEI group that advocated for more professional development in implicit racial bias training. He earned his BA in English education from the University of Illinois at Chicago and his MEd in diversity and equity in education from the University of Illinois at Urbana-Champaign. Randolph is currently pursuing an EdD in educational leadership and administration from the University of Illinois at Urbana-Champaign.