Time is running out!

The 2020 Census will be wrapping up operations on September 30. While most households self-responded and many others have cooperated with in-person interviews, there are still some that have yet to respond.

An accurate count of our population is essential to ensure we receive the funding our community needs to properly care for our community and provide critical services and programs. The failure to count everyone decreases funding for schools, public transit, food support, Medicaid, and other critical human service programs. Even a one-percent undercount could result in our communities losing millions in state and federal funding over the next decade.

This the last chance for the next 10 years to be counted.  The Census is safe.  The Census is confidential.  Your Census response cannot be shared with law enforcement or immigration officials.  Please, cooperate with census takers.  Respond today.

We can’t wait another decade.  Everyone counts!

Illinois high school graduates in the Class of 2021 and beyond will be required to fill out a Free Application for Federal Student Aid (FAFSA) or an alternative state form created by the Illinois State Board of Education (ISBE) as part of their requirements to be eligible for their high school diploma. The new law was approved last year by the State of Illinois and takes effect this year.  Louisiana and Texas have similar legislation for graduation requirements.
The law hopes to achieve greater completion rates in post-secondary education, including community colleges, universities, and vocational and trade programs.  The legislation provides for a few exceptions due to extenuating circumstances.  Students should check with their school counselors if they have concerns.
Jerry Pope, Dean of College Counseling for D219, sees this graduation requirement as a big step forward.  According to Pope,  “Every year we have students that miss out on financial assistance because they fail to complete the FAFSA.  Some colleges now require the FAFSA to be eligible for merit based scholarships.  I encourage every family to fill out the FAFSA form.”
District 219 will host their “Financial Aid Night” on Wednesday, Sept. 30th, “virtually” via zoom starting at 6:30 pm, and will feature a nationally renowned expert on financial aid.  Please check your emails.
The new FAFSA is available on Oct. 1st, 2020.  Students and their families will be using their 2019 tax information.
D219 students and their parents can also meet one on one “virtually” with a member of the Illinois Scholarship Assistance Commission (ISAC) to receive help with FAFSA questions or concerns.

Congratulations to Rachael Swiercz, teacher at Niles West High School, the winner of the 2020 Teacher Excellence Award given by the Chicago section of the American Chemical Society. The purpose of the award is to recognize, encourage and stimulate outstanding teachers of high school chemistry/chemical science in the Chicago section. Swiercz will receive a $1,000 award, a certificate and one year membership in the American Association of Chemistry Teachers. She will be presented with the award at the Chicago section’s Education Night later this month.

After consulting with the Skokie Health Department regarding their recommendations for a safe resumption of limited outdoor use of our respective buildings by clubs, sports, and activities, we have decided to expand our activities (listed below) with appropriate limitations on participant size and scope of activity.  The overarching theme for each approved activity will be to ensure the safety and health of our participating students and staff. The activities below are purely optional for both students and staff. In addition, the administrative team reserves the right to cancel any activity based upon compromised health and safety protocols or the threat of adverse weather.

“Contact Days” will be starting the week of September 28th and are limited to outdoor facilities only. These athletic activities will adhere to the 2020 summer camp protocols for health and safety, including all participants wearing masks. As a result of the outdoor requirement, there may be some sports that may not find the “contact day” option pertinent to their sport. Registration on 8 to18 for your specific sport will begin early next week and valid physicals must be on file in the athletic office in order to participate. Participation in contact days are voluntary for students and staff. All participants must adhere to social distancing and the 2020 summer camp protocols.

Sponsors may request access to our outdoor facilities and to conduct curbside fundraisers. There is limited space so daily use will be limited. These are purely optional for students and staff and all participants must adhere to social distancing and the donning of masks at each event. There will also be limits on the number of participants based on recommendations from the Skokie Health Department.

A limited number of performance-based fine arts classes may access our outdoor facilities. Because of the airborne nature of the use of instruments and voice, there will be strict limits on the number of participants and the type of formations permitted based on recommendations from the Skokie Health Department. To reiterate, these events are optional for students and staff, and all participants must adhere to social distancing and the donning of masks at each event.

Participants must provide their own transportation to and from school. When the activity concludes, participants must leave school grounds. Congregating in the parking lots is not permitted for safety and health reasons.

Steps in the 2021 Competition
Over 1.5 million juniors in about 21,000 high schools entered the 2021 National Merit Scholarship Program by taking the 2019 Preliminary SAT/National Merit Scholarship Qualifying Test (PSAT/NMSQT®), which served as an initial screen of program entrants. The nationwide pool of Semifinalists, representing less than one percent of U.S. high school seniors, includes the highest-scoring entrants in each state. The number of Semifinalists in a state is proportional to the state’s percentage of the national total of graduating seniors.

From the approximately 16,000 Semifinalists, about 15,000 are expected to advance to the Finalist level, and in February they will be notified of this designation. All National Merit Scholarship winners will be selected from this group of Finalists. Merit Scholar designees are selected on the basis of their skills, accomplishments, and potential for success in rigorous college studies, without regard to gender, race, ethnic origin, or religious preference.

These outstanding high school and undergraduate educators participated in an extensive application process that focused on their teaching approach and experience. Academy members were selected from almost 400 applicants and represent a variety of educational contexts in 22 U.S. states and Canada.

Over the next three years, Academy members will engage in professional learning experiences to equip them to promote and support evidence-based teaching practices, drive change in science education, and elevate the professional and scholarly profile of science teaching. They will work with HHMI BioInteractive to share inclusive and equitable science teaching practices that incorporate our classroom resources, approach, and values. Those who complete the Academy will engage in a variety of activities as part of BioInteractive’s efforts to empower science educators and inspire their students, including designing and facilitating professional learning for other educators.

Canvas is a learning management system (LMS) that allows teachers to provide instructional support, class calendars, assignments, and resources for students in a safe online environment. Canvas is being used as the primary course connection between students and teachers with Remote Learning in the 2020-21 school year. Once we return to traditional in-person classes, Canvas will continue to be an integral part of classroom instruction.

Canvas can provide you with specific information about your student’s curricula, so you have a better understanding of the work that teachers and students are doing.  Assignment detail and student scores are available in your student’s Canvas account.

What is the Parent Observer Role in Canvas?

Observers have limited permissions that allow them to see what is going on in a course and a calendar of assignments.

What can Parent Observers view in Canvas?

Below are the features available to Parents. Please note that not all courses use all features.

Students and Parents can access Canvas through a web browser or on a mobile device using the Canvas Student/Parent app.

This June, Illinois Governor J.B. Pritzker signed Public Act 101-0642 into law, designating November 3, 2020 as Election Day, a state holiday. As a result of this, Niles Township High School District 219 schools will be closed on this day, and it will be a non-attendance day for students for remote learning.

This state legislation also creates an opportunity for high school juniors and seniors who meet certain qualifications to serve as an Election Judge on that day.

To qualify as a student judge, you must:

Election judges receive $200 for their work. This compensation is paid to students who attend training, pass the test and work on Election Day. All three conditions must be met.

For more information on how to apply and be selected as a High School Student Election Judge, visit the following link: https://www.cookcountyclerk.com/service/high-school-student-election-judges 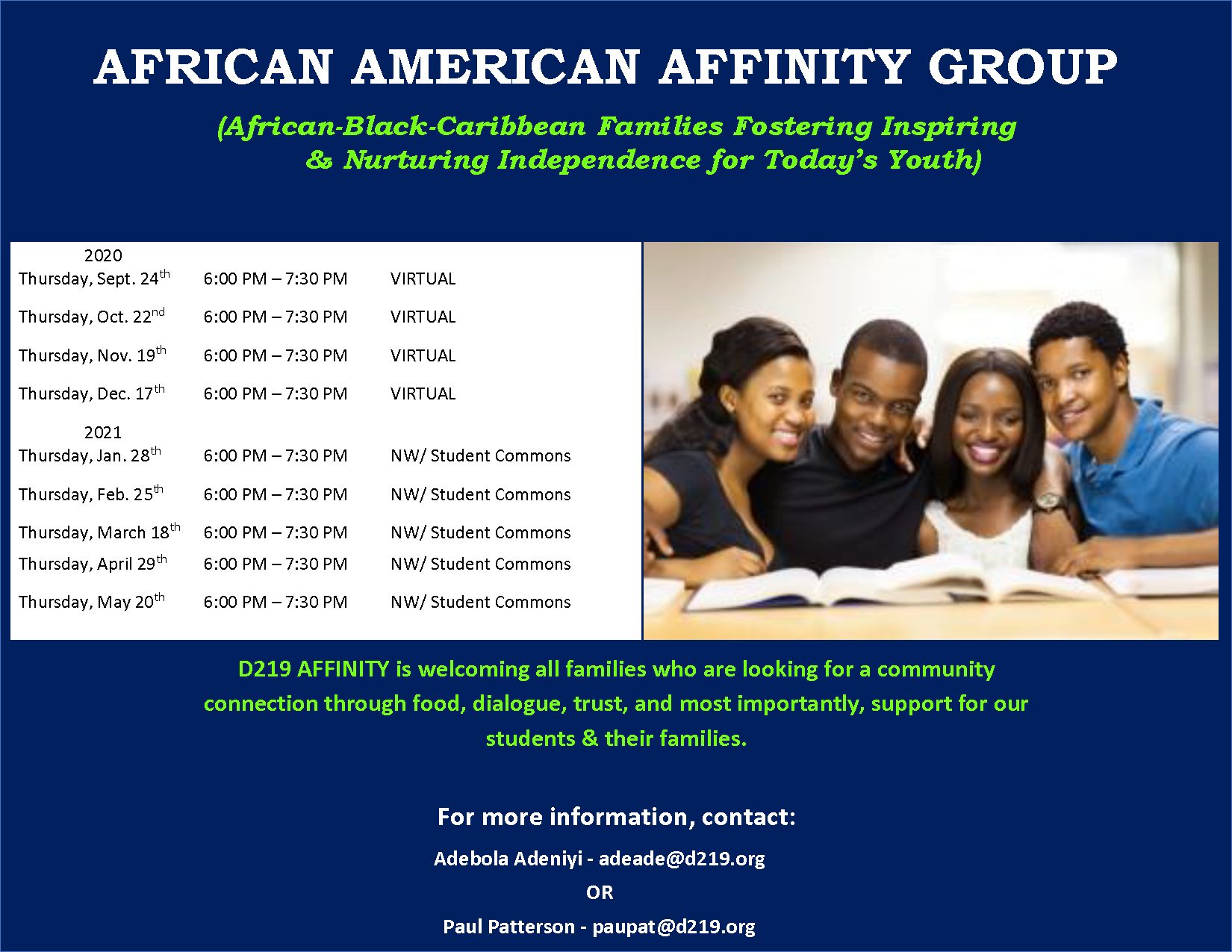 It’s that time of the year again! We are so excited to have you join us this fall semester for our AFFINITY virtual meetings, which will be held once a month on Thursdays from 6 p.m. – 7:30 p.m. Our first ZOOM meeting will be on Thursday, September 24, from 6 p.m. to 7:30 p.m., and the theme is, “Adapting to Your New Normal.”

PLEASE ATTEND! Your input is needed, valuable, and essential. So far, we have encountered many challenges this year from the pandemic to the injustices that are continuously disrupting the lives of people of color. Now that we are fully adjusting to the changes that have taken place, we’d like to hear from you all. Let’s talk about virtual schooling, what’s going on at home, and how we may best support you. We want to live through you vicariously and be in your shoes for a day. Our goal is to provide you all with a safe space in which you can debrief and express your emotions about the current world we live in. Also, as per usual, we will provide you with tips for your child’s success at Niles North and Niles West.

If you are able to, which we would very much love that you could, PLEASE RSVP via this link, so we may prepare for our meeting.

We look forward to seeing new and familiar faces!