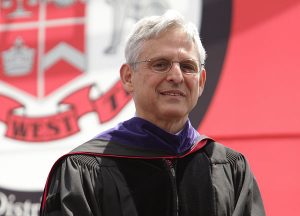 The Niles West High School community and Niles Township High School District 219 are celebrating the confirmation of Niles West alumnus Merrick Garland to the position of U.S. Attorney General. The United States  Senate voted on March 10 to approve President Joseph Biden’s nomination of Judge Garland to head up the U.S. Department of Justice.

“We are honored and thrilled that one of our Niles West alumni is now ascending to the highest level of public service by becoming our U.S. Attorney General,” said Niles West Principal Karen Ritter. “What a great message to our students and our community that a Niles West grad is now the chief lawyer of the federal government and will serve as the principal advisor to the president of the United States on all legal matters.”

Garland is currently a Circuit Judge of the U.S. Court of Appeals for the District of Columbia. He graduated from Niles Niles West High School in 1970; at that time, he was living in Lincolnwood.

Garland has remained an active supporter of his hometown schools. He addressed the Niles West graduating Class of 2016 at its commencement ceremony, the first time the school had a distinguished guest speaker at a graduation ceremony. (He was inducted into the school’s Distinguished Alumni Hall of Fame the same day, May 29.)

Garland returned to Lincolnwood in September of 2018, when he delivered the keynote address at Lincoln Hall Middle School, during Lincolnwood School District 74’s kickoff event for its 75th anniversary. Garland, who graduated from Lincoln Hall in 1966, spoke about how his education in the school district set a foundation for his later success.

“The Lincolnwood schools gave me the preparation I needed to succeed in high school,” Garland said at the anniversary event. “I am proud of the education I received and I am proud of my community. It was not just a great education. It was how it reinforced my sense of community.”

Niles West’s Assistant Principal of Operations Steve Parnther is gratified that today’s students can look to role models like Garland to see that their pathways from Niles West can take them to the highest levels of success.

Parnther, himself a Niles West graduate (Class of 2007), was interviewed by ABC Channel 7’s Ravi Baichwal on February 22. (You can watch the piece here; the segment with Parnther filmed at Niles West begins at about 1:46.)

“We are always encouraging our students to find their passion even amidst the adversity they may come across,” Parnther said. “Having someone like Judge Garland, a West alum, shows what is possible and he is an inspiration. We’re very fortunate to have prominent alumni who are public servants, professional athletes and entrepreneurs. It is uplifting anytime our students can see themselves in alumni who have lived out their passion.”