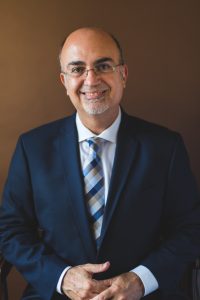 Skokie, IL  – The Niles Township High School District 219 Board of Education has announced the appointment of Dr. Mateo Mohammad Farzaneh to fill the vacancy created by the resignation of James Specker in June 2021. Dr. Farzaneh will serve the remainder of Mr. Specker’s term, which expires in April 2023.

“I am humbled, honored, and proud to have been appointed to serve as a Board Member for D219 Niles Township High Schools” said Dr. Faranzeh.  “Serving a district that is as colorful and diverse as our beautiful community will give me an opportunity to give back in my humble ways that all responsible citizens strive to seize. Thank you, Board of Education for putting your trust in me. I pledge through hard work, collaboration, communication, civility, and humility to serve D219’s students and their families without exception.”

An Iranian native, Mateo Farzaneh attended high school and college in southern California.  After spending seven years in nursing and health care industries, his curiosity led him to pursue a higher education in history.  He is quadrilingual, speaking Persian, English, Spanish, and Arabic.  Recipient of a number of prestigious awards and fellowships, he taught world and Middle Eastern history at Santa Barbara City College and California State Fullerton before joining NEIU’s History faculty in 2010.  Dr. Farzaneh and his family reside in Lincolnwood.