The Niles Township High School District 219 Board of Education recognized stellar students who excel in their clubs, and also recognized their inspiring sponsors. The Make A Difference Award winners for January represent the Latinx Club at Niles North and the DECA Club at Niles West.

From the Latinx Club at Niles North: 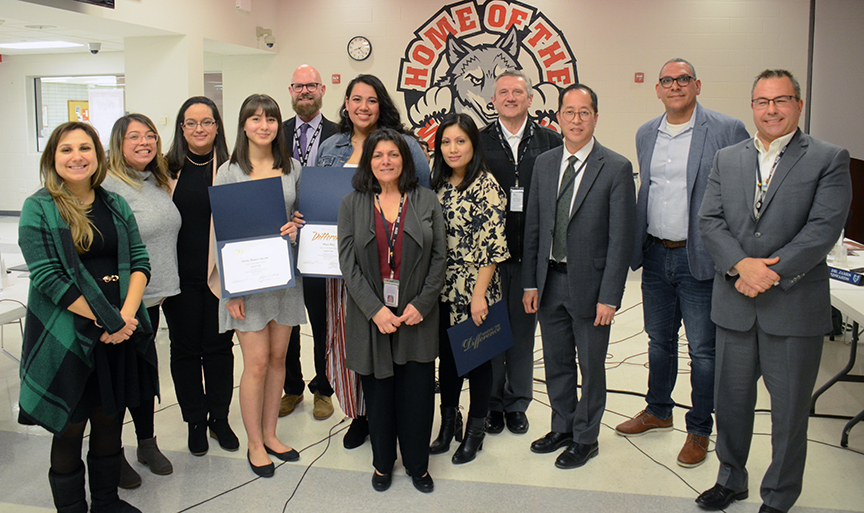 Jatziry Ramos Jacobo is a sophomore who lives with her family of four. They emigrated to the United States from the Mexican state of Guadalajara. Her mother works in a hospital and her stepfather drives for DrivX.

“Jatziry has made a difference as a leader in Latinx club by building community with her peers who have similar journeys, toward the goal of making them feel welcomed and supported,” said Niles North Principal James Edwards. “The club also allows her to continue to feel connected to her Mexican culture and traditions. Furthermore, the club symbolizes a sense of unity because all club members know that they are there to help each other.  Last year, Jatziry also made a difference by helping to organize a mural painting activity with local artist Victor Montanez that helped the school community understand the rich history and traditions of Latinx culture.”

According to Jatziry, her work in Latinx club “is more than just a simple club, it is a place where we can all get together and make extraordinary things happen.” Jatziry’s future goal is to pursue a career as a law enforcement official.

Maya Rios is a senior and is proud to identify as a Tejana. She lives with her mother, brother and grandmother in Skokie. Latinx club was the first club Maya joined at Niles North, and she quickly found her peers to be a second family to her.  Her leadership in the club created a supportive environment where “we could eat, talk about issues that impact Latinx members and prepare for presentations at diversity night and pep assemblies,” she says. Maya says she “is so proud to be part of such an amazing club” and feels honored to be able to call herself a leader in this club.

According to Edwards, “Like Jatziry, Maya was instrumental in creating the mural project last year that brought so many people together to make an everlasting cultural impact on Niles North. Maya plans to attend Oakton (Community College) next year and her career goal is to become a private investigator.”

Both students expressed their gratitude to the club’s two sponsors, Spanish teacher Alejandra Arteaga and Mathematics teachers Cecilia Serrano, for supporting them and challenging them to step up as leaders.

Serrano told Board members that it has been gratifying “to watch both these young women grow into such powerful female leaders in our community.”

Arteaga noted that Jatziry and Maya made a significant and lasting contribution to Niles North through their leadership on the mural project. “We make it a point in the club to think about what we can do to educate ourselves so we can share more about our culture with the rest of our school.”

From the DECA Club at Niles West: 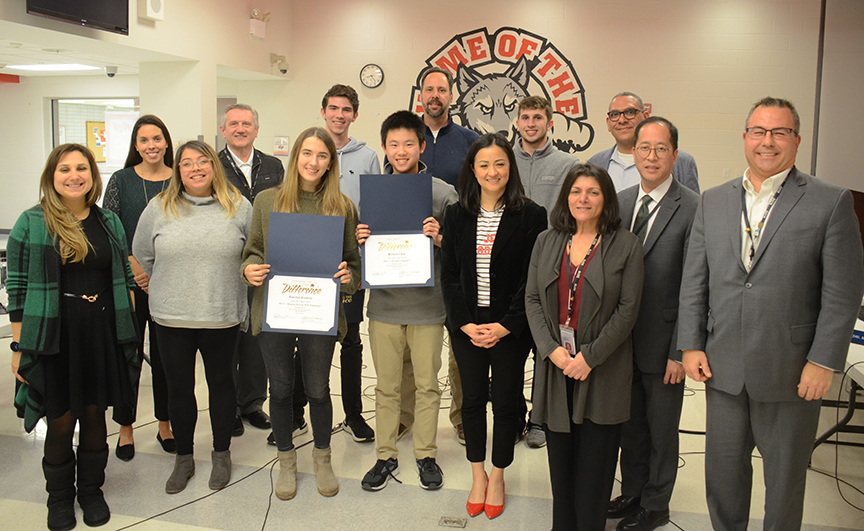 “When you hear about DECA, you don’t think of the Distributive Education Clubs of America, the organization’s original name,” said Niles West Principal Karen Ritter when she introduced the January honorees to the Board.

“At Niles West, when we hear DECA, we immediately think of the entrepreneurial club that provides soft serve ice cream through DECAlicious,” Ritter said. “In addition, we think of students who have an interest in project-based learning and reaching beyond their local school community to raise awareness around bigger societal issues such as immigration or healthy eating. Tonight, I want to express my gratitude for our two DECA sponsors, Eric Lueder and Tricia Brown, who create the conditions for students involved in DECA to take an issue they are passionate about and develop a project to raise community awareness that impacts the lives of many beyond our school building.

“I also want to recognize two of our DECA groups who truly impacted our school this year with their important community awareness projects. The first group is Richard Chen and Henry Gussis, with their project titled, Eat Smart: Biting Into the Truth, where they motivated and inspired students to develop a balanced diet and empowered them with the skills and knowledge needed for proper nutrition. The second team is Adem Memidzan and Katarina Kraljevic with their project, Breaking Down the Wall: Immigration.

“To give you a little bit of background about DECA, the program started 25 years ago at Niles West with Mr. Lueder, who was asked to sponsor the activity in his first year of teaching. The program has grown over the years to about 100 students, and Ms. Brown joined as a cosponsor. Both sponsors believe they play a minimal role in DECA, but if you talk to the students, they say they could not carry out their projects without them.”

The DECA sponsors say about Adem and Kat, “They chose a topic that they are passionate about, because they come from families of immigrants, and they have shown growth and perseverance through this process.” About Richard and Henry they say, “They came up with the topic, they took charge, and they were so driven and independent.”

Lueder told the Board that part of what makes Adem and Kat’s project so powerful is that it covers a topic, immigration, that is controversial. The students organized an in-school discussion featuring an impressive speakers panel that included elected officials and immigration experts.

“Part of our challenge was to learn ways to bring this topic to a full discussion without offending people,” Adem said. The discussion, which was open to all students at Niles West, provided opportunities for candid conversations about immigration that otherwise would not have taken place, according to both sponsors. The team will also be raising funds to create a new scholarship for Niles West students.

Richard and Henry’s Eat Smart project was a comprehensive effort that included:  a school-wide messaging campaign; a visit with a Northwestern University cardiologist who provided results of his own research about healthy eating; a field trip for students to University of Illinois, Chicago, to learn from the director of the school’s nutrition program how race and socioeconomic class affect eating habits; and a visit to UIC’s food science lab.