Niles North students who model inclusion and Niles West ping-pong enthusiasts who thrive under the mentorship of their sponsor were honored with the Those Who Make a Difference Award by Niles Township High School District 219 Board of Education members on February 11, 2020. 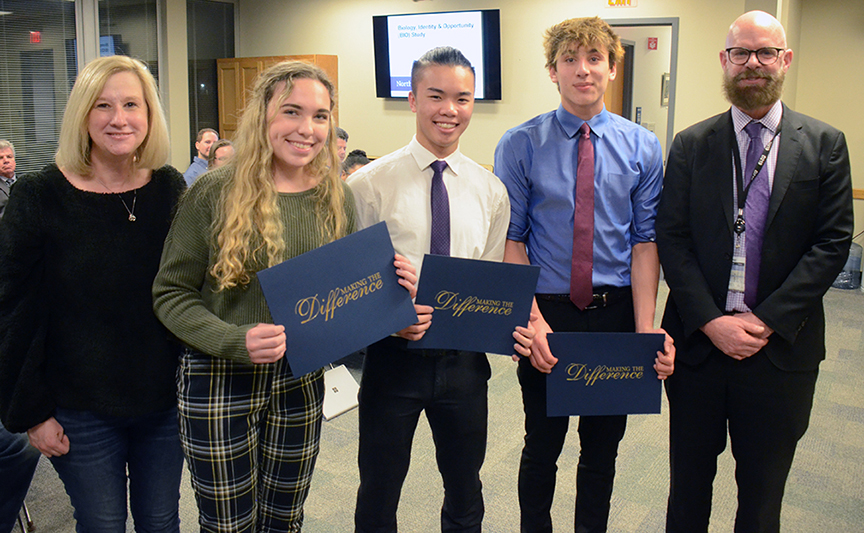 “PALS is a service club which teaches and supports general education students to work with students in our Special Education program — specifically students who have profound disabilities,” said Niles North Principal James Edwards. “It’s an inclusion initiative where students focus on the socio-emotional realm and help their pal to feel valued in our school community through friendship. PALS play games together, participate and support activities such as the Council for Exceptional Children (CEC) basketball team, engage in volunteer activities with their pal (such as working at Feed My Starving Children), and celebrate their friendship at an annual picnic event. They also help support transfer students and lead school-wide initiatives such as Autism Awareness Month and ‘Spread the Word to End the R- Word.’”

Devin Zakeri is a junior who joined PALS due to his participation in CEC basketball at Niles North. “After going through training and developing relationships with some of his ‘pals’ in the classroom, he has learned so much about himself and about life,” Edwards said. “The kids in the classroom all have unique stories and lives that inspire him every time he sees them. Despite only getting to know the students as of this year, friendships have already been formed, and both the students and Devin look forward to ‘hanging out’ every week — whether it includes snowflake-making, coloring, playing Uno, or practicing how to ask and answer questions.

“According to Shannon Dwyer, many students in special education classes see the same people throughout the day and have very few friends who aren’t in their classes,” Edwards said. “This year marks her third year being part of PALS.” Shannon mentions that “every year I’ve come back because it has been extremely rewarding. I am happy to be the friend that my pal can look forward to seeing every Friday. Likewise, I am just as eager to see my pal. Spending time with my pal is just like spending time with any of my other friends. While it may take a little more patience sometimes, our conversations are very funny and interesting. I find that oftentimes, these students provide more of a service to us with how much better they make our day.”

One of Jason Le’s s favorite authors, Paulo Coehlo, said that “The world is changed by your example, not by your opinion.” According to Jason, “Throughout the school day, I always like to remind myself to be more altruistic and empathetic towards others, because sometimes I feel as if I do not see enough of these characteristics among my own peers. PALS has helped me accomplish these ambitions; it has offered me perspectives I had never even thought of before. By engaging with students in the special education program, it has taught me to become more courteous and patient. I encourage others to support and join the program because you will quickly discover that these students offer many unique learning experiences.”

The Board also recognized PALS sponsor Christine Beeftink, who is a guidance counselor at Niles North. “I really believe that the students in PALS have the biggest hearts in the school,” Beeftink said. “They make such a difference in our school, and I learn something new from them every day.” 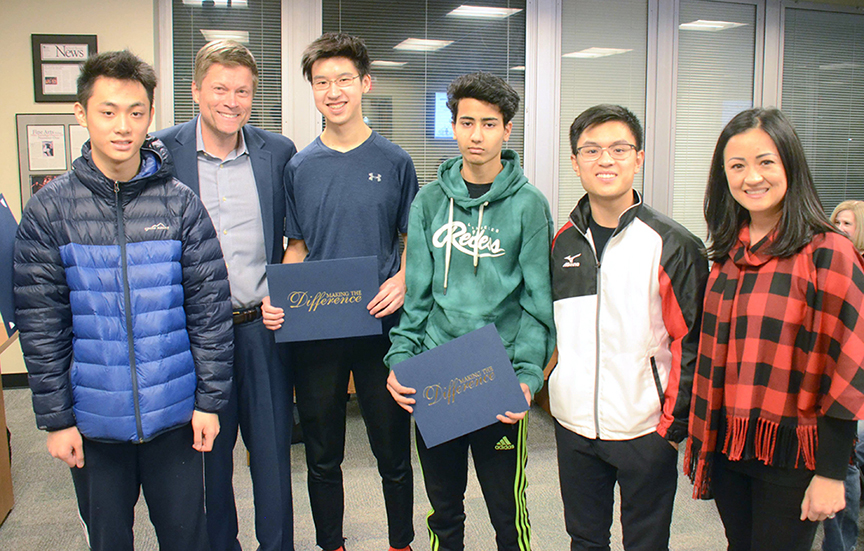 “Mr. Pope grew up on a farm and was the first to go to college in his family,” Ritter said. “He had great mentors during these formative years that took him under their wing, despite his many adversities, and he credits them in helping him finish college and setting him on the right path. Mr. Pope thinks of these important people in his life and has always had a strong desire to be that mentor in young people’s lives. He sees the potential in students when it is not always evident to others or even themselves, and he finds fulfillment in giving back.

“One of the first students Mr. Pope mentored was a former gang member. He had no resources whatsoever, but Mr. Pope saw a lot of potential and leadership in this student. Mr. Pope knew that if he didn’t help this student, he may never see him again, he may never go to college, and he may possibly stay in the gang. Mr. Pope made sure he got into college, got him a summer job, and stocked his dorm room with everything he needed. Mr. Pope also used his connections to make appointments with a doctor, dentist, financial advisor — all former students of his that did the work pro bono. The student asked Mr. Pope, “Why would you do all this for me? Why do I need all this?’ Mr. Pope replied, ‘Because you’re going to be successful and make a lot of money one day.’ This former student finished college, got his Master’s degree, Ph.D. and now teaches at a university. He is married and successful. Mr. Pope took a chance on him, and that chance changed the trajectory of the rest of his life. He says that sometimes one conversation, one interaction with a trusted adult can change the path for a student, and this is only one example of how Mr. Pope has been that trusted adult for a young person.

“Mr. Pope mentors young people because he sees himself in them,” Ritter said. “Since he’s worked in District 219, he has mentored countless students, and says that he does more college counseling in the hallways and during ping-pong club practice than in his offices at both North and West.

“The Niles West Ping-Pong Club started five years ago when a student asked Mr. Pope to sponsor the club, after everyone else he asked declined. Mr. Pope, knowing that he didn’t really know how to play ping-pong, said he’d think about it. The student walked away, discouraged. Mr. Pope, not wanting to let the student down, said, ‘OK! I’ll do it!’”

“Most of the students, like Mr. Pope, knew very little about ping-pong when they first started, but with practice and help from their peers, they have increased their passion and their skill for the sport. Even Mr. Pope has improved and claims that he beats everyone. It has been reported that he talks a lot of smack.

“Dylan became the captain, and he helps lead the team with Mr. Pope,” Ritter said. “He feels that ping-pong brings people together and that it’s a positive influence. Dylan likes it because anyone can join and get involved. Ping-pong is making a difference in students’ lives because it’s a way to socialize, to compete, and to mentor one another while having fun at school. He says Mr. Pope is great for his mental training because he talks so much smack during matches.

“Jaber, the president, helps to supervise and lead the team,” Ritter said. “He enjoys talking to Mr. Pope about getting into a good college. He thinks Mr. Pope is a great sponsor and is good at recruiting students to the club.

“Mr. Pope’s life, many of the students he’s mentored, and the evolution of the ping-pong team is a story of how greatness can be achieved from meager beginnings,” Ritter said. “It’s a story of seeing the potential in others and guiding them down the right path. It’s about giving back and talking smack, but it’s mostly about mentoring others to reach their full potential. Thank you Mr. Pope, Dylan and Jaber for all the mentoring you do and for changing students’ lives.”