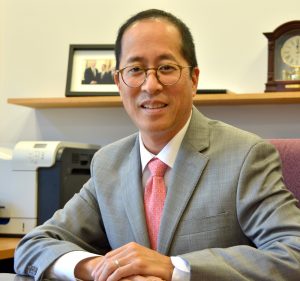 Steven T. Isoye was named Superintendent of Niles Township High School District 219 in May 2016. Before that, Isoye served as Superintendent of Oak Park and River Forest High School District 200 for six years. While at Oak Park and River Forest High School, he: kept a focus on supports to assist students who struggle; built better relationships throughout the community; supported efforts to decrease suspensions; moved the district towards a 1:1 technology environment; and continued the district‘s work on equity.

Isoye was principal of Maine East High School in Park Ridge from 2007 to 2010; during that time, he was named 2010-2011 Illinois High School Principal of the Year by the Horace Mann/Illinois Principals Association. Since 1998, he has served on the Board of Trustees for the Illinois Math and Science Academy.

Before his leadership at Maine East, Isoye was principal of Warren Township High School's freshman-sophomore campus in Gurnee, where he also served as head of the Division of Science, Industrial Technology, and Family and Consumer Sciences from 2000 through 2003. While at Highland Park High School from 1997 to 2000, he served as science department chair. In 1998, he was named the Illinois State Teacher of the Year by the Illinois State Board of Education and received the Milken Educator Award. Prior to taking on administrative leadership roles, Isoye taught science at Deerfield High School, The Latin School in Chicago, and Loyola Academy in Wilmette.